Tools for the Brave New Board meeting

I WENT TO A STAFF RETREAT YESTERDAY THAT DID NOT SUCK.

I just thought it might be important to convey that to you, after spending three posts complaining about awful board meetings. I truly wasn’t looking forward to this one – it was a planning retreat for university administrators that started at 8 am on a Monday after a long summer of blissful, meeting free time. But the planners used a number of tools that made the meeting seem far more productive than I expected.

I’ll get to some of the structure ideas later. But first, I want to share a couple of techie tools with you before your email dings six or seven times and you have to leave.

The first one is called Plickers (a play on the older, but now antiquated “clicker” technology). With the Plickers tool, each person gets a card with a kind of QR code on it. To vote, they hold up the card with the proper response facing upward, and the facilitator scans all of the responses in the room. Results show immediately on the screen. This allows a vote to be taken quickly, and anonymously. The website shows Plickers being used in classrooms of all ages, but I think they would be enormously useful in adult meetings as well.

Another tool I’ve used successfully in the classroom is Poll Everywhere. Poll Everywhere is different than Plickers (or clickers) in that it requires no special tools, and allows for individual answers, not just voting on a select number of choices. This means that it can also be easily used to collect ideas, do assessment, and raise questions. Again, interactive so everyone participates, requires less time than raising hands, and has the advantage of anonymity. 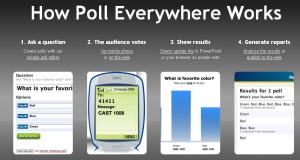 Okay, those are the tools. Now a couple of other ideas from my more-successful-than-expected staff retreat:

Several days in advance, the facilitator sent out a prep document with several questions about issues facing our college in the coming year. Filling out this questionnaire and sending it in prior to the retreat allowed the facilitator to get a sense of the room (and possible problems) before the meeting started, and also reassured everyone that even if they didn’t get a chance to speak at the meeting, their voices would be heard.

There were a variety of types of interaction

In the morning (when we were fresher), we had unstructured discussion about overarching issues. Later in the day, we had short, informative presentations from various people in the university whose job it was to support us.

The messaging was consistent and positive

As a university professor, I’ve grown accustomed to doom and gloom. Most staff meetings in the past several years start with announcements of what else has been cut from the budget, what new administrative hoops we need to jump through, and what pronouncements are coming from the state to make our lives harder. This was different. Early in the day, we dispensed with the idea that we had to avoid talking about big ideas and new initiatives because we couldn’t afford them. Our facilitator (who happens to be a poet) coined the phrase “Looking for the Loophole to Greatness” to exemplify the attitude that we need to find a way to make the important things happen, not just figure out how to do more with less.

For the items on our pre-retreat questionnaire that weren’t discussed (by our choice, see above “plickers” voting cards), the facilitator promised to collate our answers and send them in a document for later reading.

So carry on, meeting planners! Look for the Loophole to Greatness! There is hope!

I am Professor and Chair of Arts Management and author of Arts Management: Uniting Arts and Audiences in the 21st Century (Oxford University Press, 2013). I believe that arts and culture are undergoing a profound change in the 21st century, and I love talking with people about how we continue to bring arts to our communities and individuals give the brave new world of social media, technology and economic changes. Join the conversation!
View all posts by Ellen Rosewall →
This entry was posted in Uncategorized. Bookmark the permalink.